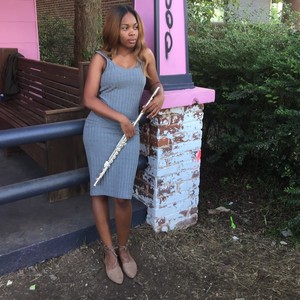 Stilwell school of the Arts graduate with the State Fine Arts Seal and the Fine Arts seal of distinction on Diploma.
I will be Attending Brevard College this Fall to Double major in Music Education: Instrumental, Music Therapy in order to better my musical skills.

Miss. Morton was a student director for Browns Mill Elementary School Band Program for the 2016-2017 school year. She auditioned for the Metropolitan Youth Symphony Orchestra where she sat second of five players in the Flute section. While there she met one of her closest friends and a wonderful Trombonist Philip Williams. On a band trip, Caitlyn had the chance to meet the band director at Vanderbilt College where she realized that others were living her dreams and it is indeed possible to do whatever you set out to do. Caitlyn is a member of the Atlanta Flute Club Flute Choir where she plays with other member each year and this year met Award Winning Traveling Flutist Conner Nelson. This past Inauguration, Caitlyn ran into a man in Washington playing an amazing tune on an instrument called the fife which is very similar to the flute. She fell in love with the fife and immediately rushed to buy one of her own which she now cherishes. Caitlyn graduated from Stilwell School of the Arts May 25, 2017 where she participated in the school productions of The Who's Tommy Musical as well as Ragtime the musical. She also participated in the guitar senior showcases, sang in the choir, was marketing manager in yearbook, participated in Poetry Club, and is a member of the National Society for High School Scholars. She received two Fine Arts seals on her Diploma those being the Fine Arts Seal of Distinction from the County as well as the Fine Arts Diploma Seal from the state. In the fall, Caitlyn plans to attend Brevard College in North Carolina where she will Earn her Bachelor of Arts Degree in Music Education and a minor in Broadcasting/Journalism. After Brevard she plans to teach in North Carolina for a while and then teach in Amsterdam, Netherlands while she earns her Master's of Arts Degree in Music Education at a Institution in Amsterdam, Netherlands