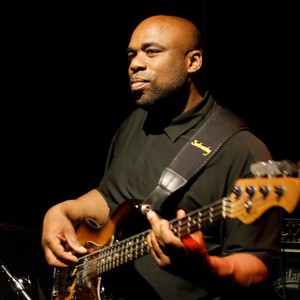 I am sensitive to the goals and abilities of each student but always want to see them working on their technique to produce a great sound in tune and in time. I like to ground my students in the fundamentals of music-making so that their expression and style can flourish. I ensure that they have a regular practice schedule with new goals each week. I love to see their progress, and to help them gain confidence and command of their instrument. Ultimately I like to teach students to teach themselves; to overcome the problems and challenges posed by the music they want to play, using their own initiative.

BIOGRAPHY
Wayne Batchelor is one of NYC's most versatile and experienced bassists. Wayne began his career at London’s Guildhall School of Music and Drama, on the post-graduate program, where he specialized in the double bass and electric bass. He spent eight successful years as part of London’s music scene, working with artists such as saxophonist, Courtney Pine and guitarist, Ronny Jordan among numerous others. He played regularly with the Reggae Philharmonic, and Portuguese jazz pianist, Bernardo Sassetti. He then relocated to New York City to study at The New School under the tutelage of Buster Williams and later on, Ron Carter. Wayne soon became established on the international circuit, and has toured or gigged with Bobby Watson, Ernest Ranglin, James Williams, Kirk Whalum, and Todd Williams to name a few.

In 2016 Wayne played the month-long Summit Tour with The Manhattan Transfer and Take 6. Wayne’s fifteen-year collaboration with vocalist Nnenna Freelon has taken him to numerous international festivals, performances at the Kennedy Center and Dizzy’s Club Coca-Cola, and he played on three of her six Grammy-nominated albums. Wayne’s diverse talents have led him to tour and record extensively with the New York Ska Jazz Ensemble, and he has recorded with acclaimed reggae drummer, Sly Dunbar, and with Bob Marley’s saxophonist, Dean Fraser.

Wayne plays regularly at All Souls Community Church, Suffren, NY and in the evening jazz services at Redeemer Presbyterian Church, Manhattan, and has also played at Jazz Vespers at St Peter’s Church, Manhattan. Wayne’s eclectic abilities are flourishing thanks to collaborations with folk-rock artists Dana Edelman, Cordelia Stephens and legendary folk artist Christine Lavin with whom he has also recorded. Since 2014 Wayne has been playing orchestral music with the Centre Symphony and New York Symphonic Arts Ensemble. In 2013 he played in the Off-Broadway Production “Deadly She-Wolf Assassin” by Fred Ho at LaMaMa Theater. He also plays regularly in a rehearsal Big Band at Lincoln Center lead by The Director of Music for LaGuardia School of the Arts, Kevin Blancq.

As a result of his passion for teaching bass, Wayne was invited to be on the jury for the Collegiate Jazz Festival at The University of Notre Dame. He taught bass for three years at Nyack College, Manhattan and has taught numerous workshops in schools and universities, and teaches private lessons. He was the Artist in Residence at the Edna Manley School of Art and Music in Kingston, Jamaica in 2015, the hear he completed his Masters of Music in Jazz Performance from Rutgers University.

Wayne is featured in the Random House book; “The New Face of Jazz,” by Cicily Janus. He lives in Brooklyn, NY with his wife and daughter.